The situation with Gamestop (GME) stock has recently flooded the news as retail traders were able to drive the price from $37 to approximately $500 within a week. This so-called short-squeeze is not the first and last unexpected event in the financial markets. In this article, we will cover the most significant flash crashes, bubbles and short-squeezes of the 21st century.

From the start of the 1980s until the year 2000 there was a huge bull market in the United States.

It was mostly seen in the tech industry with the increasing popularity of the internet.

Because of that, internet stocks were soaring higher and higher. 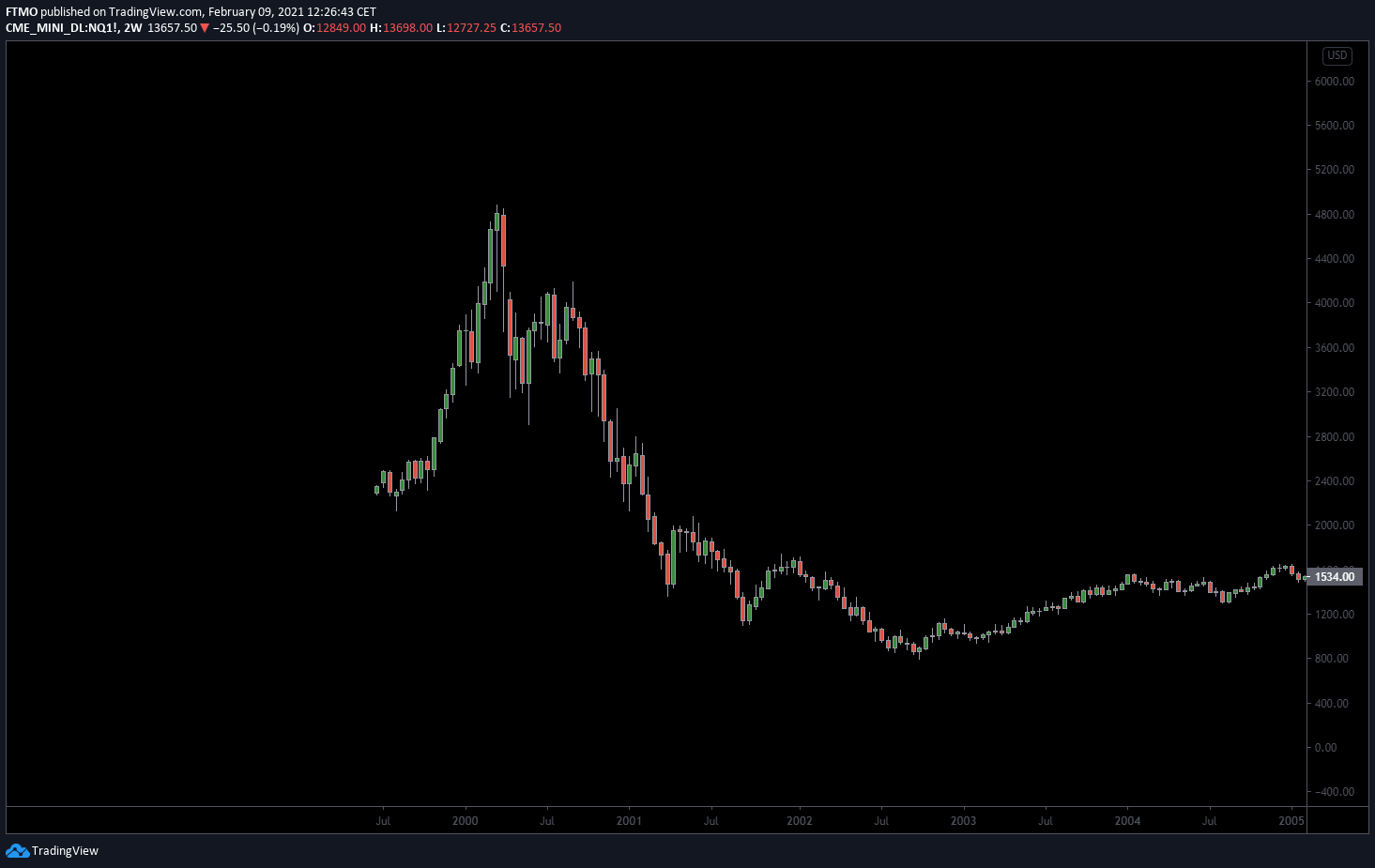 After reaching the high in March 2020 the following bear market caused an 80% decline in Nasdaq that lasted until September 2002.

The S&P 500 which is also heavily based on technology saw a 50% decrease in price.

Most stocks of internet companies lost 95% to all value causing them to run out of business and the whole US economy fell into recession.

Continuing with the US markets, a very interesting thing happened in May 2010.

For those interested, here is a live video of the event itself.

So why is the particular flash crash so interesting?

Usually, when these flash crashes happen, they are caused by some major unexpected news or institutional traders.

This one was not.

The flash crash was caused by Navinder Singh Sarao, a retail trader who lived with his parents outside of London.

Navinder used an algorithm to place large sell orders which would get cancelled before filling, this is an unlawful practice called spoofing.

This, together with the market being already in a fragile state, caused a flash crash.

Navinder was later accused of causing the flash crash and ended up banned from trading and placed on house arrest.

If you are interested in learning more about 2010 Flash Crash and how Navinder manipulated markets, you can read the book “Flash Crash” by Liam Vaughan.

Forex is not an exception of Flash Crashes.

One of the most notable ones happened in 2015 on EUR/CHF and was sparked by a fundamental event.

On January 15th, the SNB (Swiss National Bank) announced that they would no longer support the Swiss Franc against the Euro at 1.20.

This caused the 1.20 floor to collapse and on some brokers price traded all the way down to 0.68. 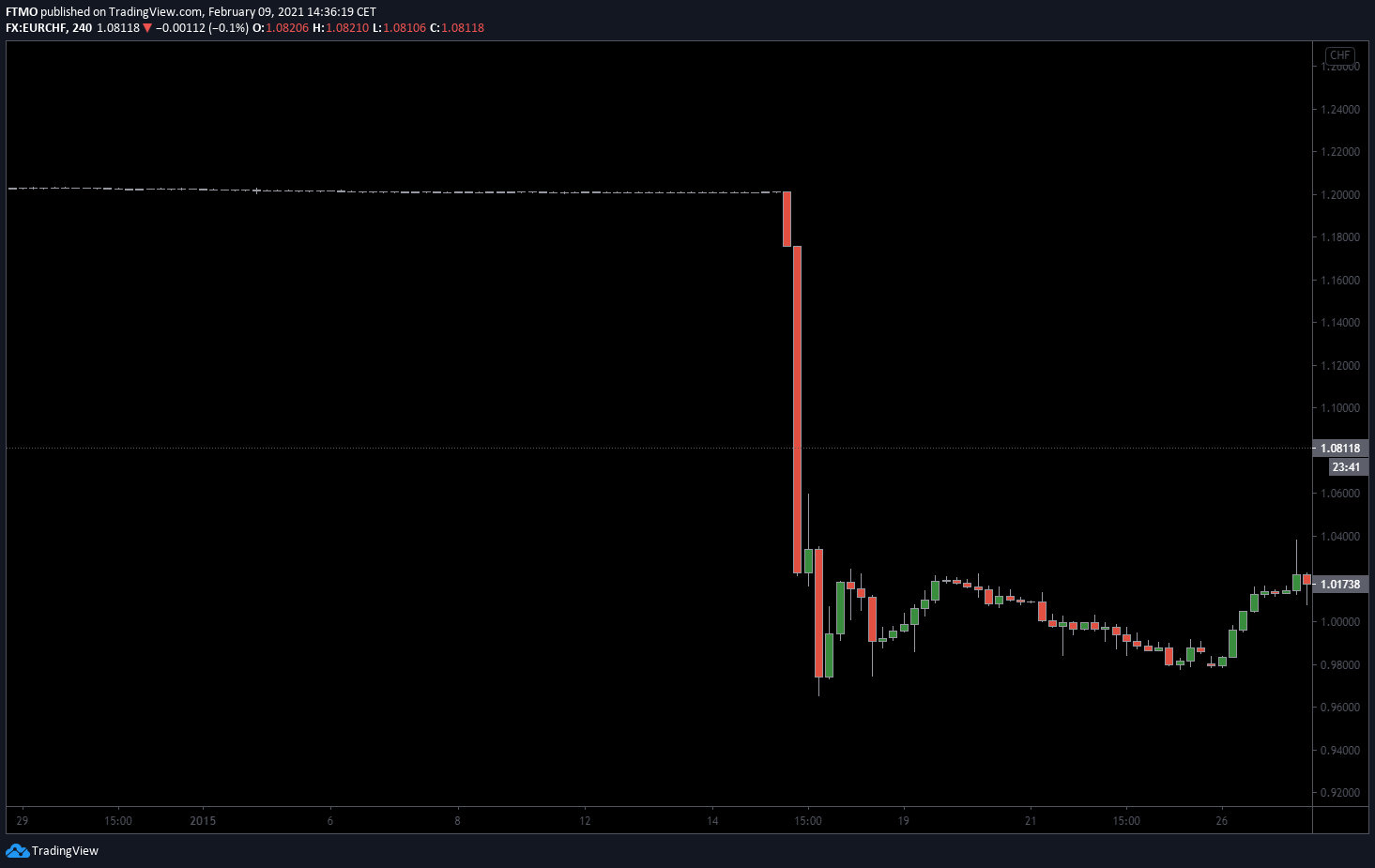 This flash crash caused a lot of brokers to bankrupt and also plenty of retail traders ended up sued by brokerage firms because they ended up owing money to their brokers due to the positions not being executed in time.

The start of the 2019 trading year was quite dramatic as on January 2nd another flash crash was seen in Australian Dollar and Japanese Yen trading pairs. 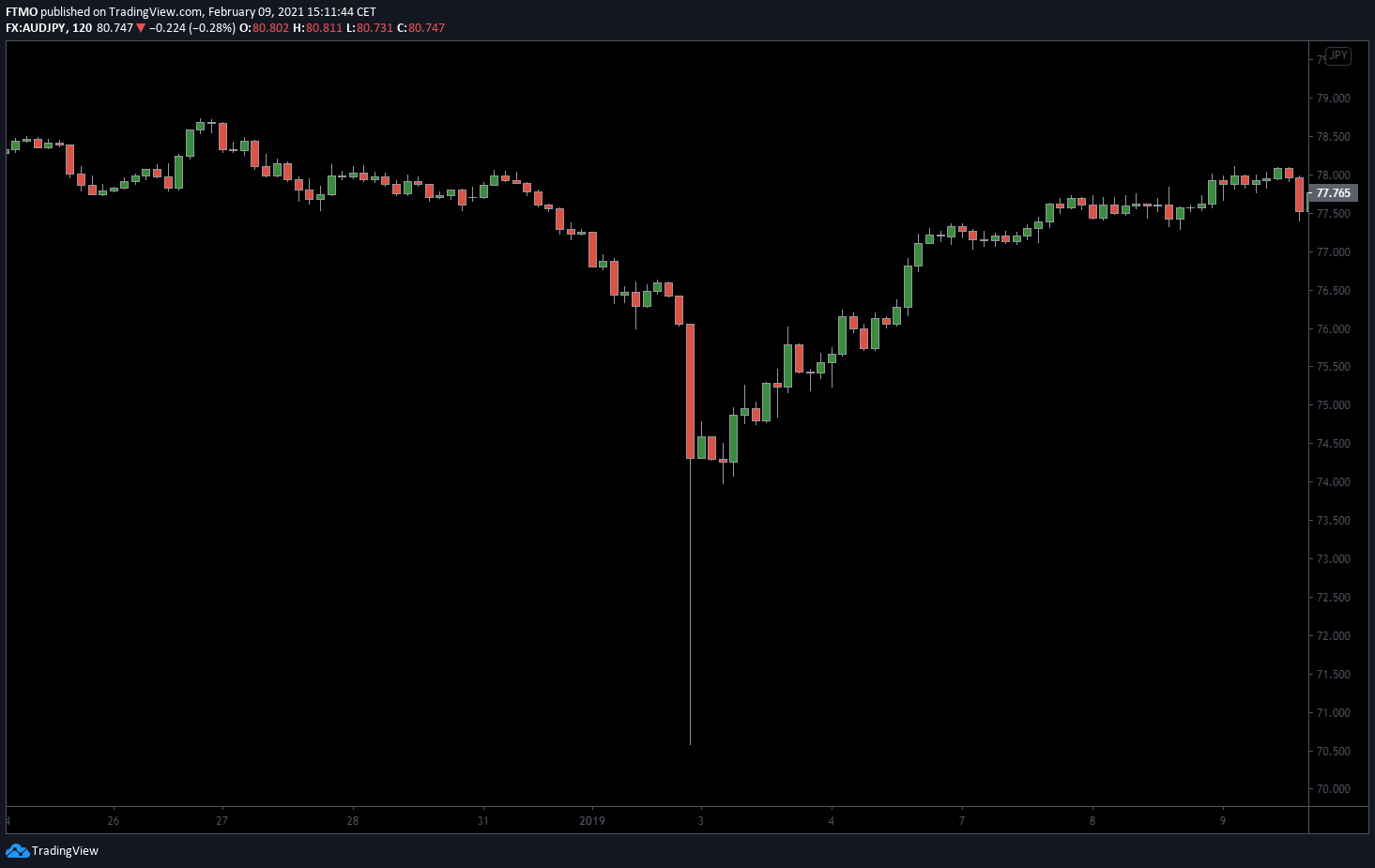 The cause of this flash crash is up to speculation.

The popular belief is that it was due to an Apple report of reduced sales forecast in China, but this is not so likely, as the report had come out one hour earlier.

Gamestop is one of the largest game shops in the United States.

Due to the coronavirus pandemic, all Gamestop stores had to be closed all over the US.

These bad conditions for the company attract a large number of hedge funds and institutions that started a shorting the stock. Because why not go against the business that has no chance of making a profit since they can’t even open their stores, right?

Well, this did not sit well with a particular Reddit community called Wallstreetbets as they did not like this inhumane approach and decided to mass buying the stock. 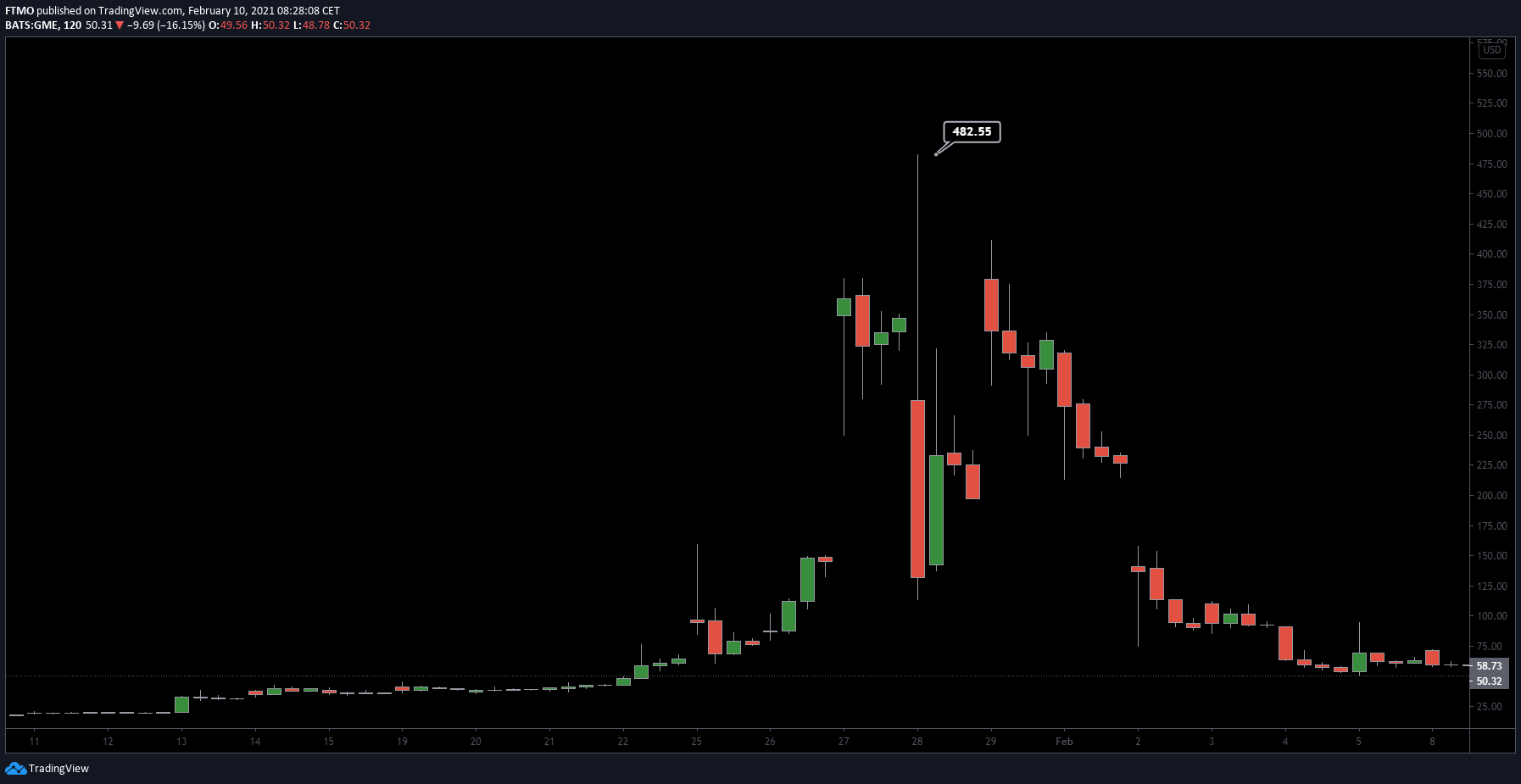 This mad David against Goliath story attracted a large audience and they were able to drive the stock from $35 on January 21st 2021 to almost $500 on January 28th.

And it got to the point where brokerage firms started to ban buying new shares of Gamestop.

Nevertheless, this spurred a big outrage among retail and the momentum in Gamestop stock was pretty much over. That resulted in price retracement all the way back to pre-breakout levels.

Before the Gamestop, there was Volkswagen.

This event happened in the midst of the 2008 financial crisis.

In October 2008, Volkswagen saw the Frankfurt-listed shares gain 400% in two days which made it the biggest company in the world at the time. 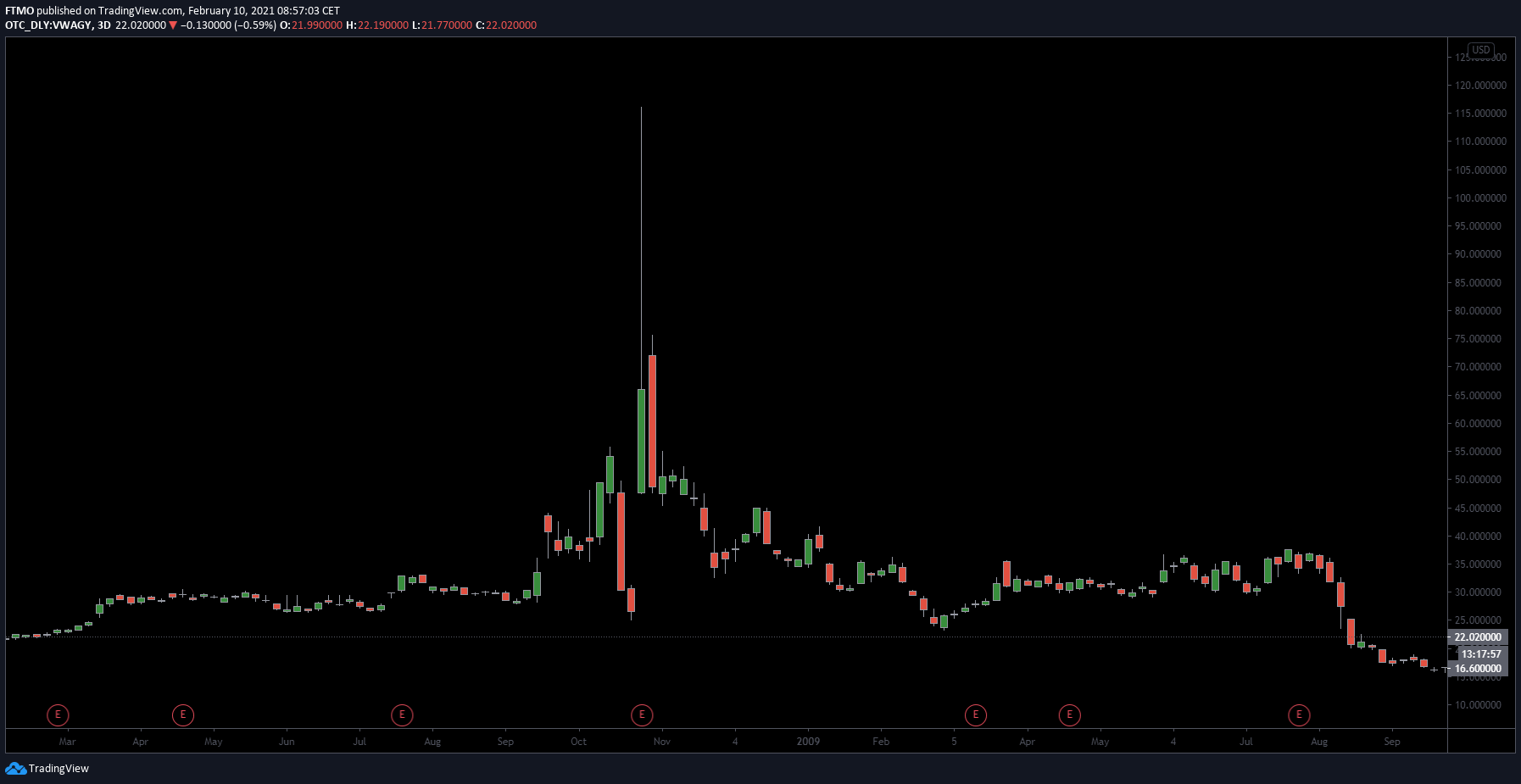 Once again, the hedge funds were involved as they were heavily shorting the stock.

But this time it was not the retail traders who were involved, it was Porsche with a surprise announcement of boosting Volkswagen stake and hedge funds rushing for an exit.

After the squeeze was done, stock retraced the whole move in just 4 days.