In June 2013, price on Gold fell to about $1200 after a severe downtrend. Price on Gold has never been that low since August 2008. Shortly after, price reversed and rallied up to $1430. 3 months later, we tested the $1200 level again in December 2013 and the price bounced again. Price hasn't tested that level until another 10 months later in December 2014.

It is not a coincidence that we see the price coming and reversing at a price level over and over again. It is very simple logic. When the price drops to a level and reverses, it marks a reversal level on a chart. This is to be interpreted as buyers coming into the market and overpowering the sellers, driving prices up. The second time price drops to that level, traders have to ask themselves: 'Buyers have come into the market at $1200 on Gold. Where is a logical price level to enter? Obviously, 3 months ago (first reversal) buyers did not allow the price of Gold drop below $1200, so there should be traders waiting at $1200 again to go long, right?' This thought proved to be right and price reversed off from our $1200 price level again... And again in December 2013. 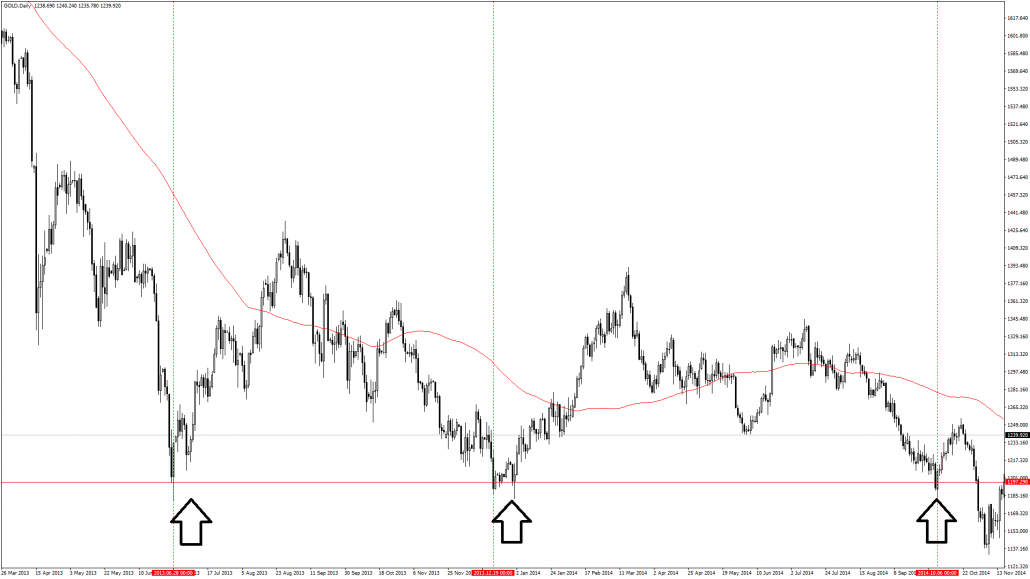 The graphical representation of this reversal level is the horizontal line drawn on the chart. Traders like to refer to it as Support, a price level where we can expect demand. On the other hand, we also have levels of supply, which traders refer to as Resistance. You can see a nice example of resistance below. 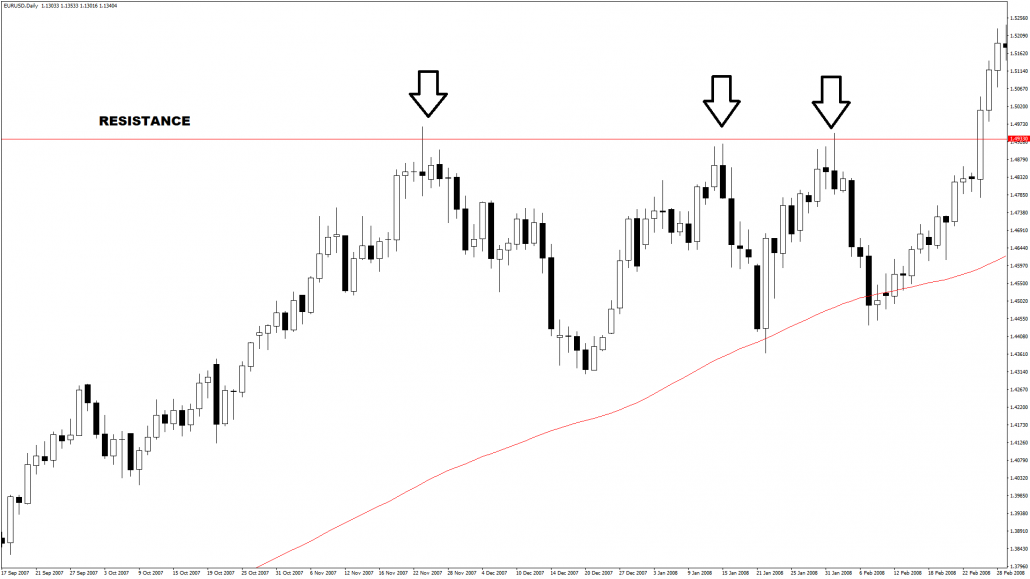 This was an introduction to a very popular trading methodology: PRICE ACTION. Price action strategies are very popular among many traders as it has a very simple and logical reasoning behind it. Price Action Traders are usually happy with a naked price chart. No indicators are required as the price is the purest information about an instrument.

The thought process of a Price Action trader is the following:

One method to project supply & demand levels are, but not limited to, Support & Resistance (S&R) zones, Trendlines, Fibonacci ratios or Highs & Lows (H&L). In this Article, I will present you a few simple trading strategies using only S&R levels and basic candlestick patterns.

Conventionally, Price Action Traders will fall into one of the two main categories:

Reversal traders project supply & demand levels and when the price hits these levels, they expect the price to reverse in their favour. In the following example, we will use candlestick patterns to confirm successful reversals. 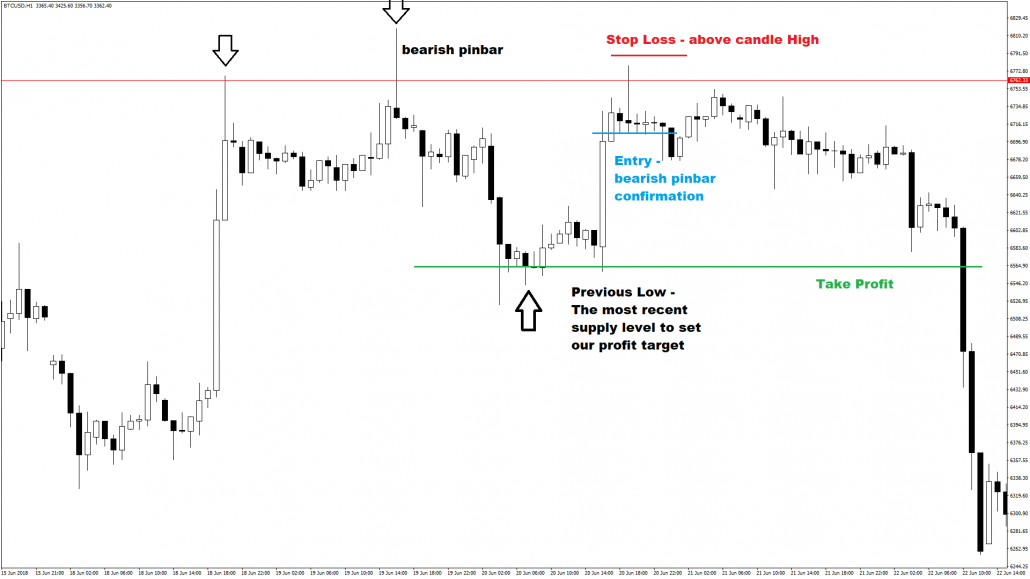 The chart above is on the BTCUSD hourly.  We can spot the first high after a bull run. The second high was then confirmed by a bearish Pin bar. Notice how the Pin bar doesn't exactly respect the previous high, however, what we want to see is some signs of reversal. Now we have two established highs and with these, we will construct our resistance level. The reversal trader now waits for the price to test this level again, which did happen a third time. Of course, we do not want to enter blindly into the third test. We require some kind of confirmation to distinguish a simple price spike from an actual breakout. On the chart, we see another bearish Pin bar that confirms our reversal idea and we put a sell order below the bearish Pin bar.

Nevertheless, an idea for entry is not enough. A trader is required to have a solid trading plan, knowing when to get out. His idea will be proved wrong if price breaks the high of the Pin bar after the entry. In such a case, the Pin bar would be a false signal and our resistance level would have failed. If our idea is proven to be right, we will be looking for a probable Take-Profit level. The previous low is a good demand level, as traders decided to push the price up there. In other words, we expect buyers not pushing the price higher, not before testing the previous low as shown in the chart.

This trade setup has a very good RRR and we see, that the previous low was almost ignored. Nonetheless, our Take-Profit has a clearly defined logic and we should not change our trading plan based on one single trade.

How much money do you really need to trade for a living? 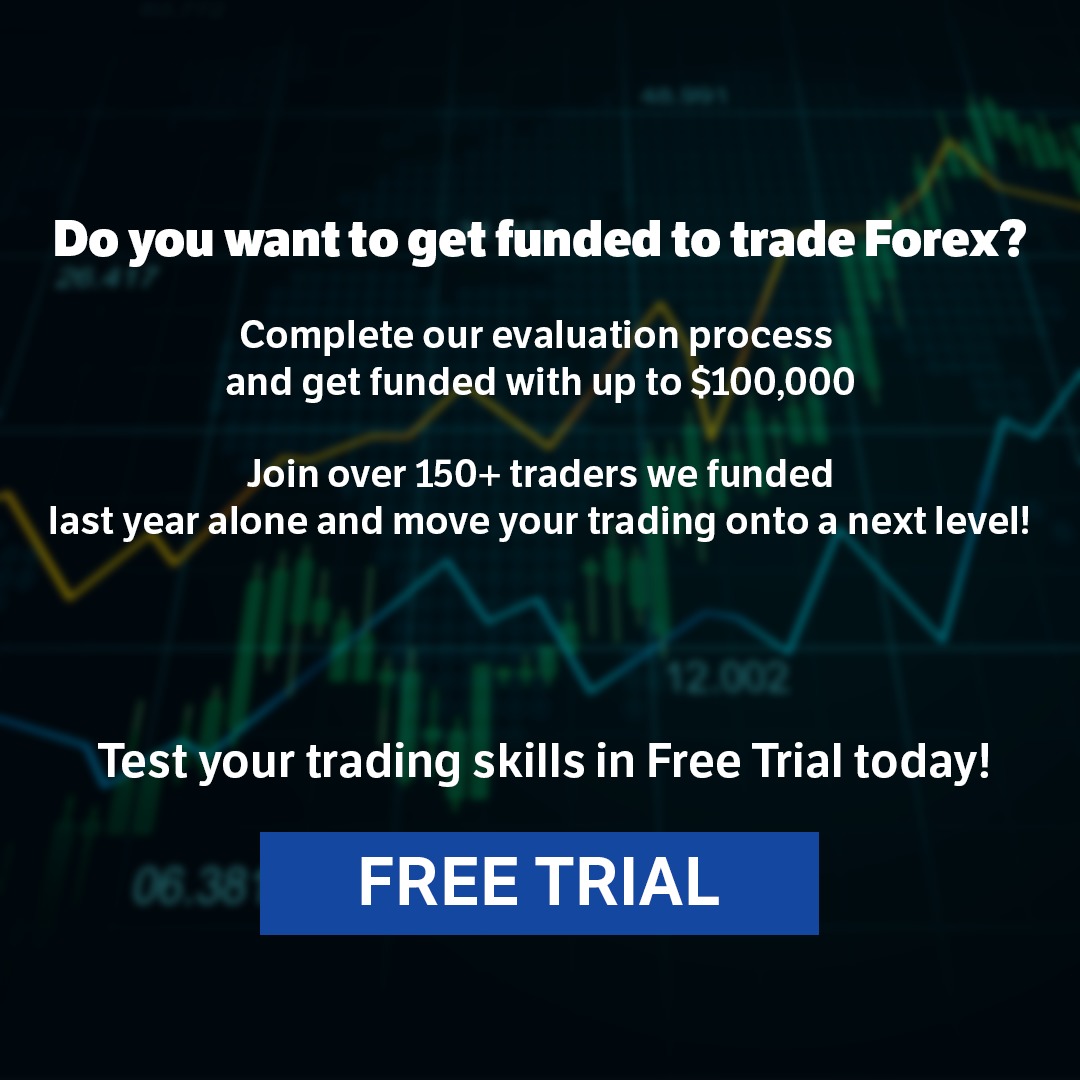