In the next part of our series evaluating successful FTMO Traders and their results, we will evaluate accounts  of three traders each of whom has a different approach. And you’ll see that a trader doesn’t need to have a large number of trades or to open unnecessarily large positions to achieve great results.

The first trader had the most volatile journey in a given month. You can see from his balance curve that it took him a few days at the beginning of the trading period to get a positive account balance and stay there. However, in the following days he was able to maintain a positive return on account, despite two fairly significant drops. Had it not been for a series of losing trades before the end of the trading period, his results could have been much better. 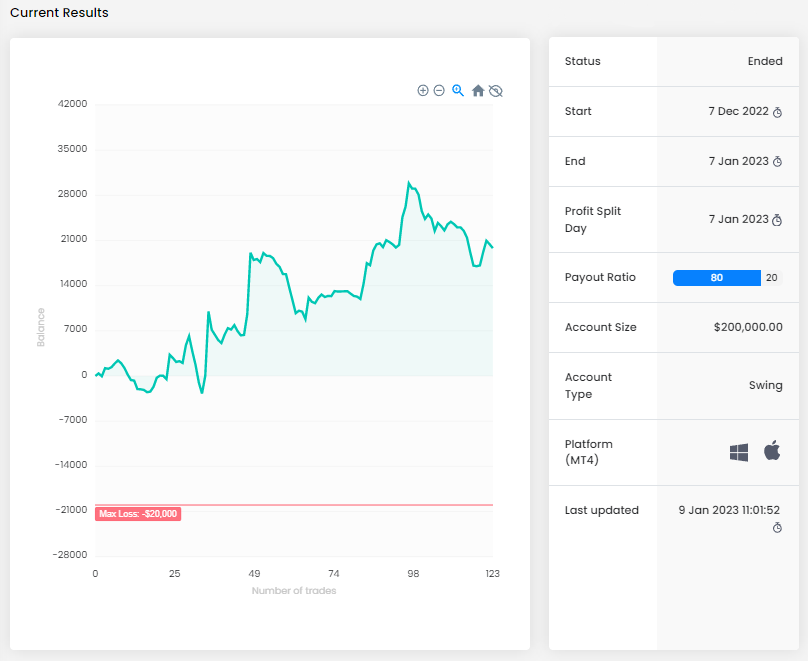 The final profit of nearly $20,000 on a $200,000 account is a very good result. The trader closed his trades on most of the trading days in profit, but at the same time he approached the Maximum Daily Loss limit twice (although still with a relatively safe margin). The Maximum Loss limit was not a problem for him.

The average reward/risk ratio above one (1.97) shows that the trader’s strategy can be profitable in the long run, even with a relatively low win rate (40.65%). He is a relatively active trader, having opened 123 trades with a total size of 1,573.61 lots during the period, which amounts to more than 12 lots per position. This is not a small number, but given the size of the account, it is not considered to be dangerous overleveraging. 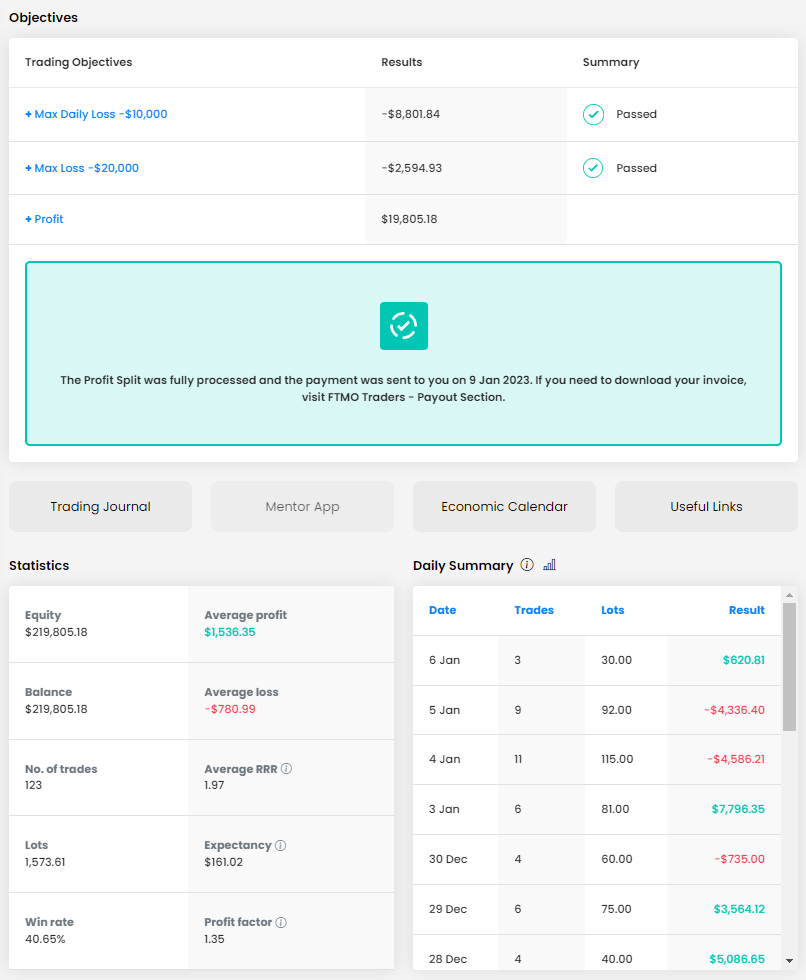 The trader used all twenty trading days, which gives him an average of six trades per day. This is not considered as excessive overtrading, but the number of trades is quite high, even for an intraday trader. The biggest problem we see is that the trader tends to frequently increase the amount of open positions at a loss. This is a very risky strategy and should be only used by very experienced traders who are clear about what they are doing and what risks they are taking. The trader sets SL and TP, but not on all trades, which is also rather negative. 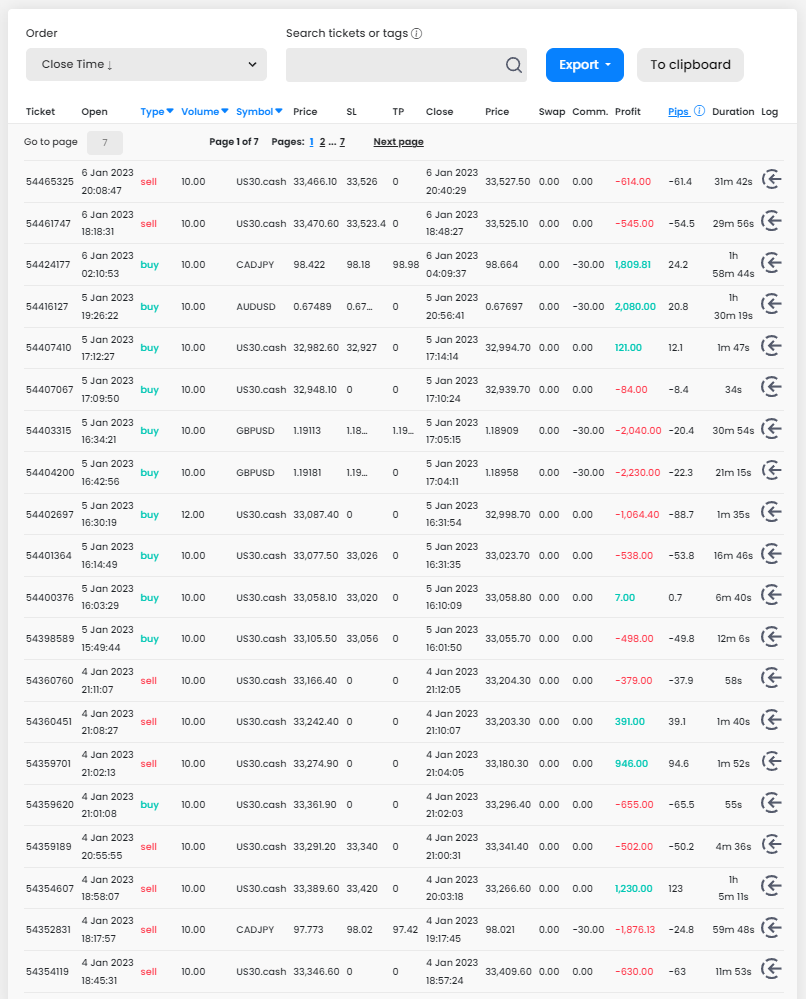 The choice of instruments traded by the trader is also quite broad, which can be a positive factor in terms of diversification, but “fitting” one strategy to so many instruments can be quite complex and managing them in intraday trading may not be easy either. The ratio of buy and sell orders is rarely balanced, but their success rate plays clearly in favour of short positions, as  the trader has made most of his profits on short positions. 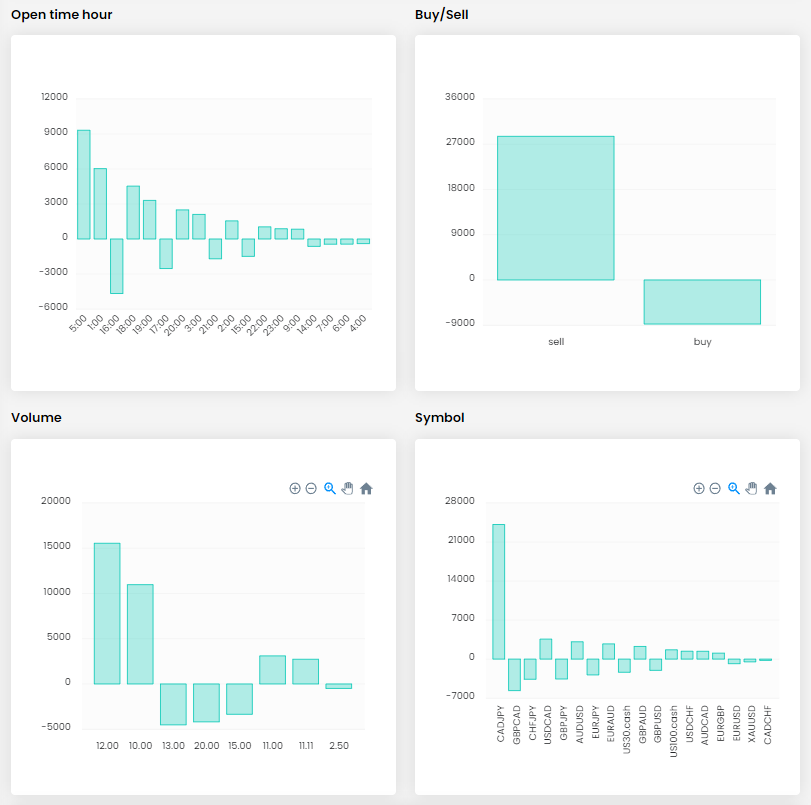 The second trader whose account was evaluated by us took a diametrically different approach to trading. The first figure shows that his trading period is much shorter and he requested a payout after only two weeks of trading. During that time he had only 11 trades, most of which were profitable, so his balance curve was positive the whole time. 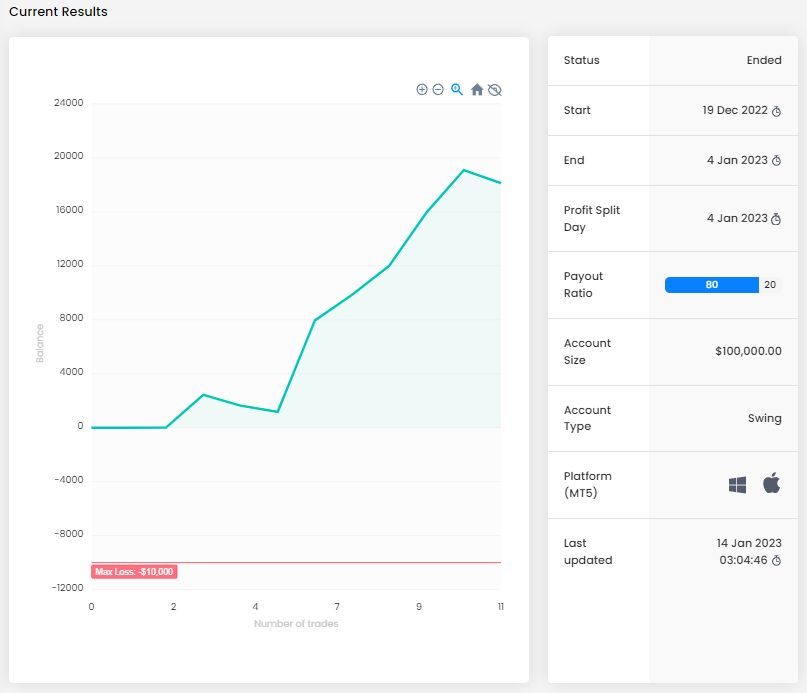 Furthermore, only eleven trades were enough for the trader to make a profit of over $18,000, which is a great result for an account size of $100,000. Neither the Maximum Daily Loss nor the Maximum Loss limits were a problem for the trader, thanks to the combination of a very high average RRR (5.17) and a good win rate on trades (63.64%). With eleven trades the trader traded a total of 22.37 lots, which is only something like 2 lots per trade, and is a fairly conservative approach. 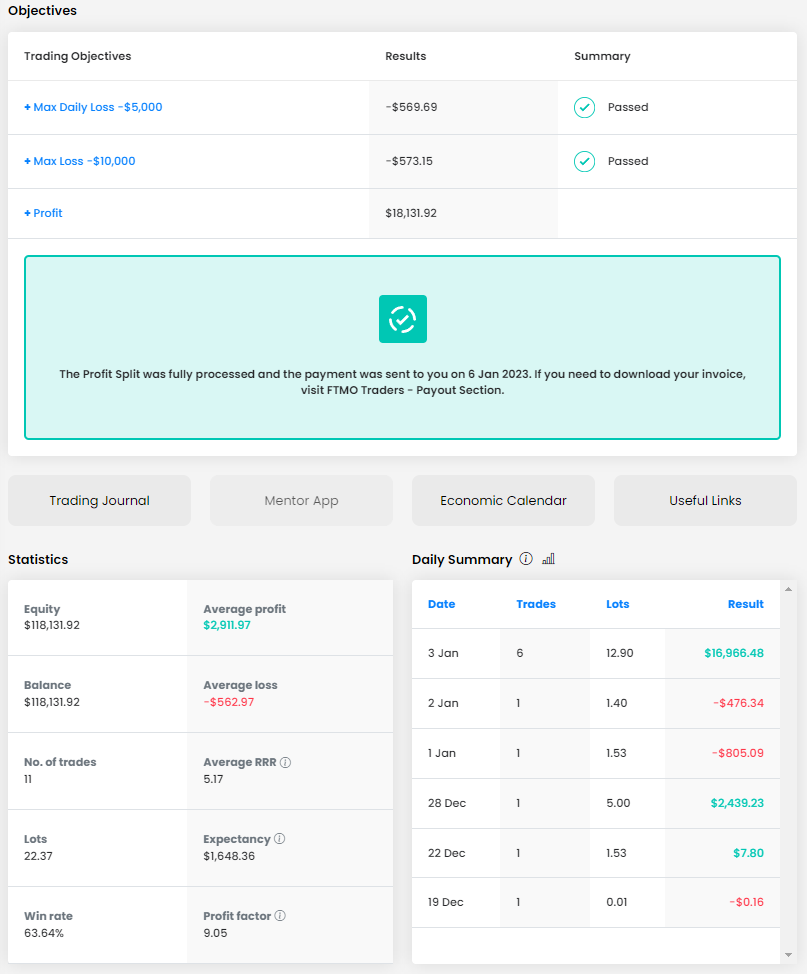 It is clear from the Trading Journal that this trader is a swing trader who holds his positions open for several days, with his longest trade lasting practically the entire trading period. His patience paid off in the end, and thanks to his small positions, the overnight swaps did not affect his profits very much. He even managed to make a profit on the swap fees with his USDJPY position which was also the largest position. We positively evaluate the Stop Loss settings for all his positions. The trader used the earlier mentioned position increase at a loss with his AUDJPY position, but in this case it ended, with a certain amount of luck, with a positive result and it is the trader’s most profitable trade. 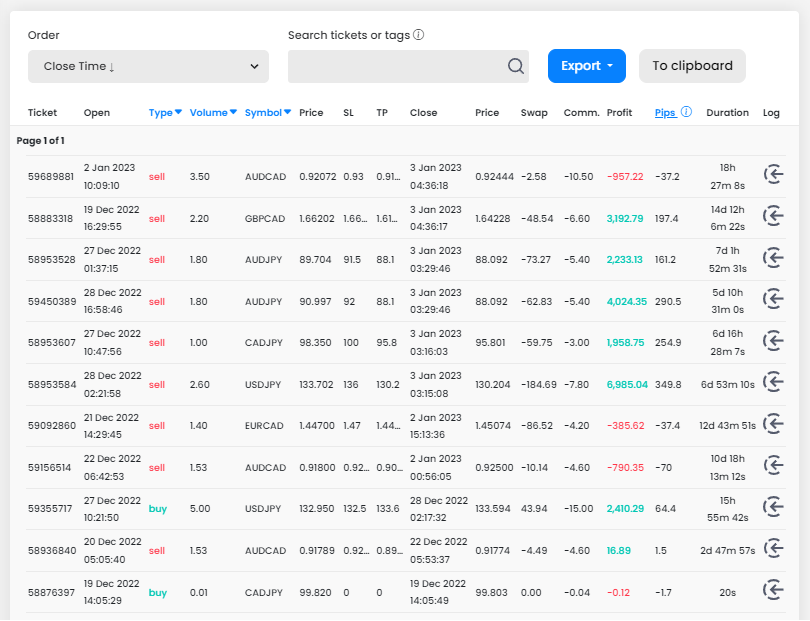 This trader traded exclusively currency pairs. Interestingly, his worst results were with the AUDCAD pair, which was used in most of his trades. He mostly opened short positions, but with currency pairs we cannot talk about the classic shorting, because it always speculates on the decline of one currency and the strengthening of the other currency. Overall, the trader’s approach can be evaluated positively and it is a good example that less is sometimes more. 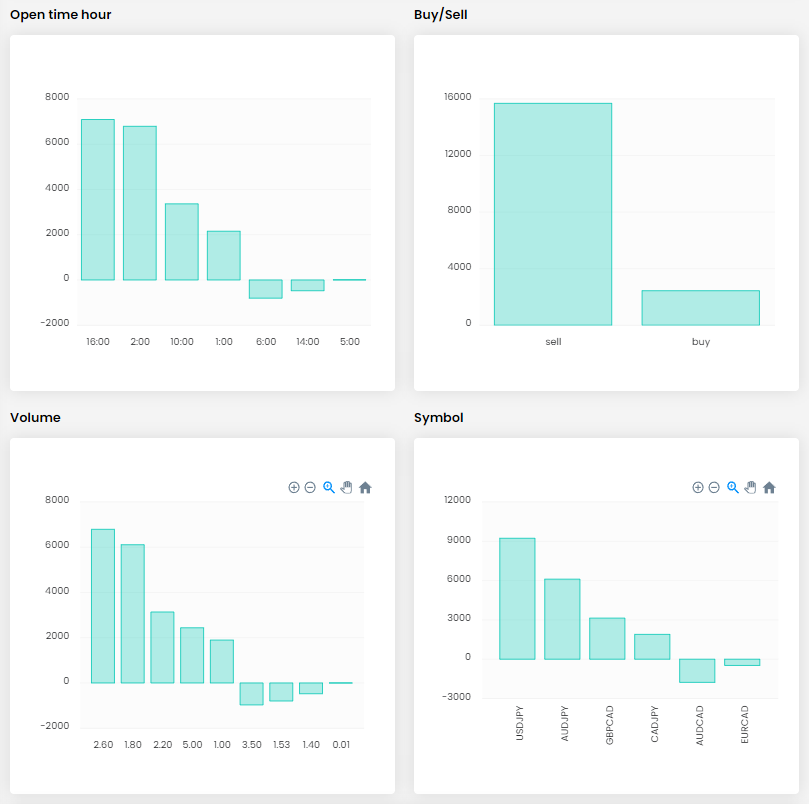 The third evaluated trader did not go overboard with the amount of open positions either, but unlike the previous trader, the duration of this trader’s trades was shorter and his position sizes were larger. Unfortunately, the trader did not avoid one major losing streak, but his balance curve remained positive throughout the trading period. 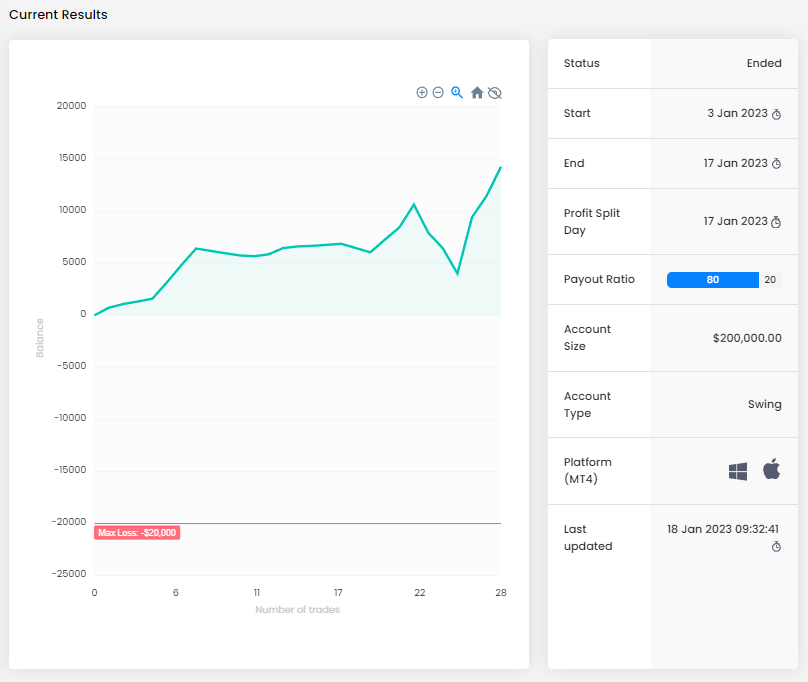 He traded only during six days within the two-week period and opened 28 positions, which is more than 4 positions per day. The Maximum Daily loss and the Maximum Loss were not a problem for him, and the total profit of over $14,000 on an account size of $200,000 is not a bad result at all. The average RRR (1.30) is also not bad and combined with the good trade win rate (67.86), the trader is able to make good profits in the long run. 138.62 lots for the mentioned number of trades is not a small amount (almost 5 lots per trade), but due to the account size, it is in order. 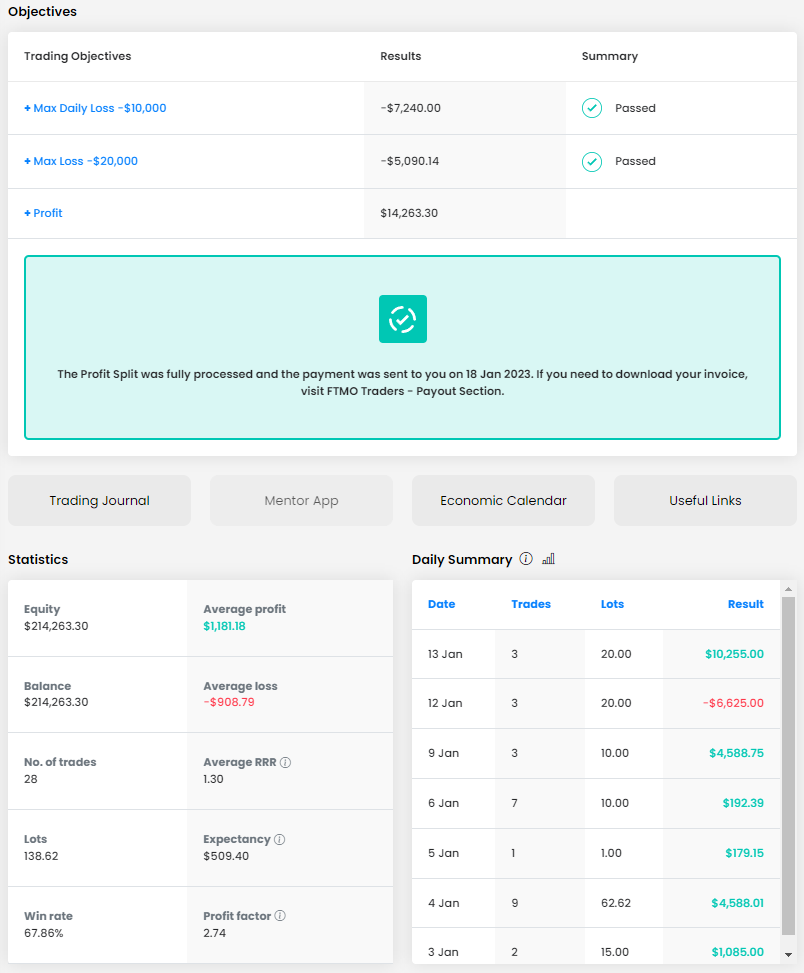 According to the Trading Journal,  his trades usually last for several hours, but the trader only rarely holds them overnight (which is good considering the size of the positions). At the beginning of the year the trader had a losing streak, after which he did not engage in “revenge” trading, which we evaluate positively. The last position on the EURUSD pair is interesting. This trader also tried to use the unfavorable movement of the currency pair to his advantage and opened new positions “at a better price”. At first, this led to a significant loss, but immediately after closing three losing positions, the trader started opening more positions in the same direction and in his second attempt he was already successful. This is a very risky approach and, again, please note that it is not suitable for everyone. On the positive side, the trader had set Stop Losses on all his trades. 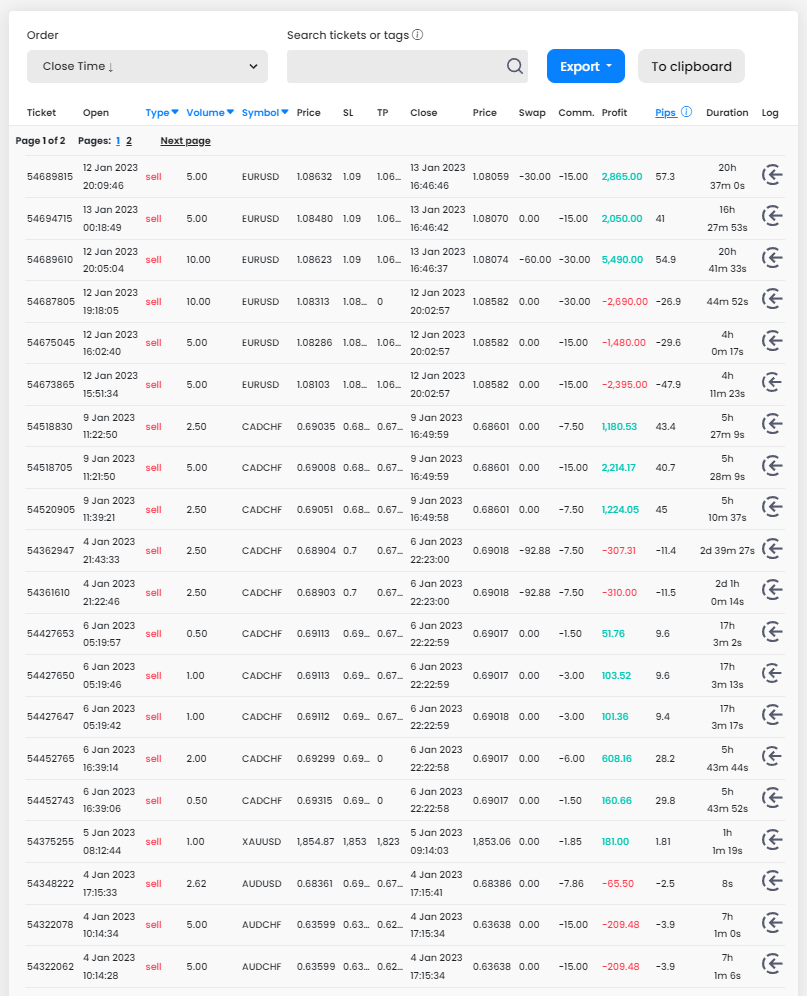 The interesting fact is that  the trader opened only short positions, which, as we have already mentioned, is not unusual in Forex, but some traders may have a psychological problem with it. The trader managed to make profits on all four currency pairs that he traded, and his small trade on gold ended in a slight plus. 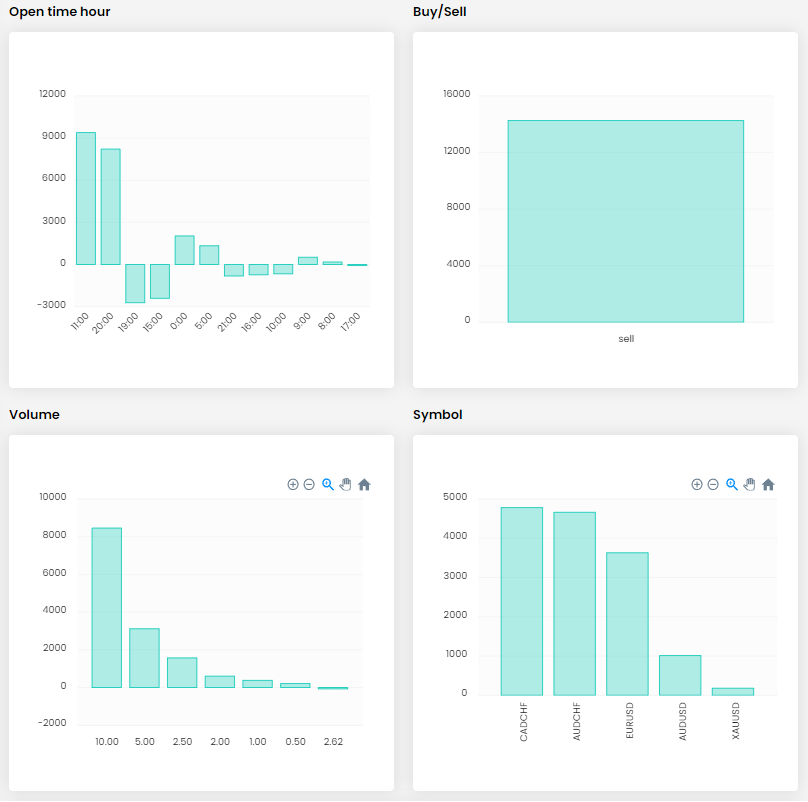 While all three traders we have analysed took a different approach to trading, the results were very good in all three cases. All of them also tried to open new positions at a loss, but this risk-taking approach did not always work out as expected. Thus, it is still true that the basis for success is adherence to the chosen strategy and proper money management and risk management.r