This fundamental outlook will bring you a couple of up-to-date news from the financial markets of last and this week. The US stock markets experienced shocks again and the US dollar boosted the week. Trump regrets the appointment of Powell to the head of the Fed. The ECB does not change its monetary policy and the Bank of Canada raised its interest rates. This week is filled with important fundamentals and summertime has ended in many countries. 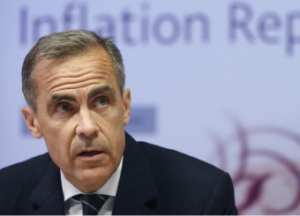 Super Thursday. That’s what awaits the Bank of England this week. Interest rates, BoE Inflation report, the Monetary policy summary, and the votes of the bank board members on rates shall be published. Half an hour later, BoE Governor Mark Carney will hold a press conference. The last 0.75% rise in interest rates was in August this year, and the members of the Bank Board last voted unanimously on keeping the rates unchanged. If the votes show significant deviations, the Pound may respond strongly. Very important will be the quarterly BoE Inflation Report where the central bank will publish new inflation and growth projections. Brexit, however, is now the most important currency mover including any updates in negotiations with the EU. Mark Carney will have to respond to the readiness of banking stability in the event of a no-deal Brexit.

The US dollar experienced another bull run last week when investors again focused on safe-haven countries. This was, among other things, due to the drop in the S&P500, Nasdaq and Dow Jones, and thus to a negative correlation with the currency. Stock indices experienced significant drops for the second time this year, and from a technical point of view, it looks like a similar scenario as in January this year. Is this a symbolic situation? Isn’t this a sign of another financial meltdown? President Trump is now engaged in mid-elections and the very last result of economic growth (GDP growth print of 3.5%), is very much in his and Republican’s favour. This Friday we expect the most important release of Non-Farm Payrolls (NFP). Expectations are now mixed, as the increase in new jobs is estimated at 191k compared to the previous 134k, but the unemployment rate and wage growth are expected to be weaker. The unemployment rate in the US is now at 3.7%, the lowest since 1969. The results of this NFP may be important for the Fed regarding the further direction of monetary policy.

The most important news for the common European currency was the European Central Bank (ECB) meeting last Thursday and a subsequent press conference. As expected, the ECB kept rates at zero, and at a press conference, Mario Draghi mentioned the slower eurozone economy growth and the predominant risk of the Italian state budget deficit being dragged over. The Italian government is dealing with Brussels on a compromise and any contradictions could cause further volatility in the Italian government bonds. Mario Draghi also confirmed the end of Quantitative Easing by the ECB. This week (on Sunday), most European countries switched to winter time. On Thursday, French and Italian banks will be closed due to public holidays.

In Australia, this week’s most important release will be the quarterly CPI inflation print as well as the Trimmed Mean CPI. The headline CPI is expected to be a tenth of a percentage point better than last, from 0.4% to 0.5%. Since this is a quarterly report, it may spark a significant volatility in the markets. The results of the Trade balance in Australia will be released on Thursday and Retail sales on Friday. In Canada, we expect regular monthly fundamentals, namely Wednesday GDP and Friday Trade balance and changes in the labour market. These will be released together with the US NFP.