Last week started on a very positive note, bringing news that pharmaceutical firm Pfizer has the vaccine against Covid-19 with more than 90% effective rate.

Stocks and all risky assets jumped on this news last Monday.

The biggest beneficiary from the news were companies harmed by Covid-19 – airlines, hotels, shopping malls.

Further, the Crude Oil soared on the news, because it was given hope that the travel industry could revive again.

Also, the British pound advanced on the news, as the UK is fighting hard with the virus and the vaccine could help to improve its economic outlook.

Though, the truth is that the vaccine is not approved either by the FDA or by the EU yet. Also, Pfizer’s capacities to vaccinate the whole world are limited. There are also shortcomings in vaccine distribution out of the U.S. The vaccine must be transported in special freezers, which will slow down the worldwide distribution.

Shortly after the vaccine news, investors realized all the vaccination drawbacks and the rally finished on Tuesday.

As a matter of fact, the public has to cope with reality and current problems.

The number of Covid-19 cases is rising both in the U.S. and in Europe, bringing more lockdowns, which harm the economies.

Both Germany and France are not sure how long the current lockdowns will last. Also, some U.S. regions consider establishing new restrictions.

Further, the central bankers speaking on the ECB forum last week did not give much direction.

They welcomed the positive trial results of the vaccine but emphasized the uncertainty of economic outlook.

Reflecting on the threat of rising Covid-19 cases and the prospect of economic uncertainty, the safe-haven currencies such as the Swiss franc and the Japanese yen moved up at the end of the week.

The S&P 500 index created an exemplary pin bar formation on the daily chart on Monday.

As we indicated in our previous analysis, the index tested previous highs and the triple top formation.

The high and low of Monday’s pin par has not been broken yet and the index formed only small inside bar candles for the rest of the week.

Even though the index finished the week at the record close of 3,585 points since 2nd Sep, it made the first step towards bears, when it broke out from the rising channel on the lower hourly chart. In order for us to confirm the downtrend, the index should close below the low of Monday’s pin bar. 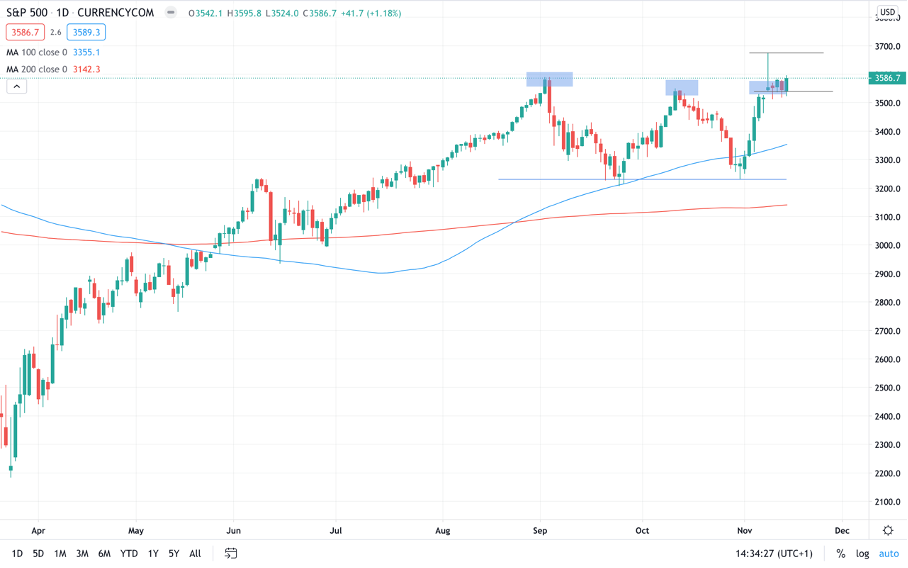 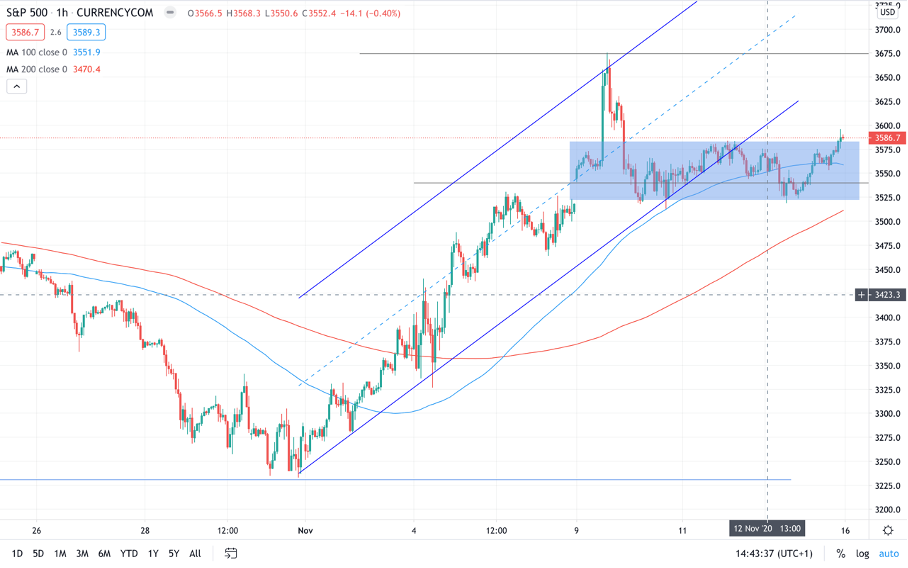 Donald Trump admitted Biden as the new US president

Donald Trump admitted Joe Biden as the new US president however, he considers the elections rigged and false. Having a Democratic President with a Republican Senate may slow down expected fiscal stimulus making the Fed implement more aggressive monetary policy. This policy could be positive for the U.S. stocks and risky assets and negative for the U.S. Dollar.

The U.S. Dollar index is moving sideways in the channel between the strong resistance of the 100-moving average and the strong support at the 92.00 level. 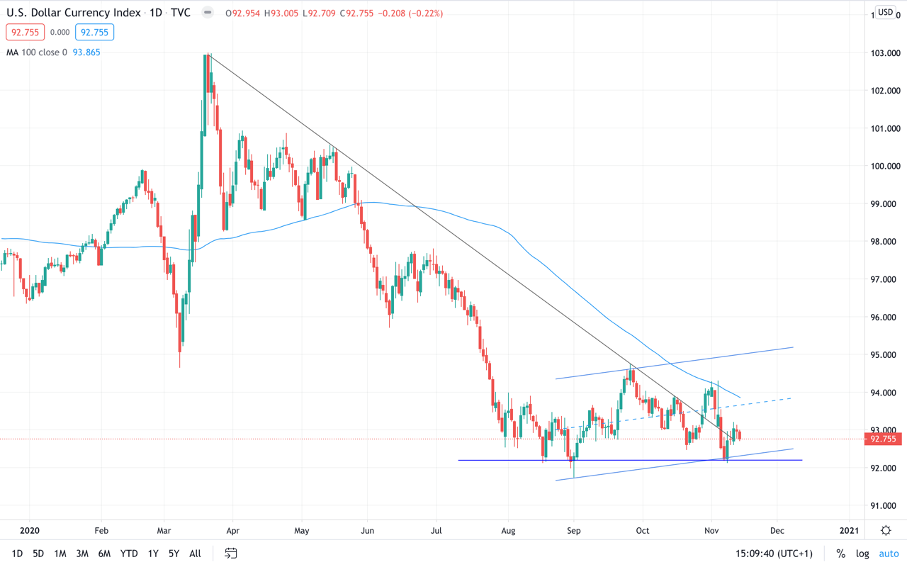 We mentioned at the beginning of the article that the sterling benefitted from the vaccine news.

Also, the news about Dominic Cummings leaving his position as the chief British negotiator supported the sterling.

Cummings was in the lead of the Brexit campaign in 2016.

Not having him in the team may persuade Boris Johnson to make more compromise on the Brexit deal. The negotiations continue this week.

The strong position of the GBP signals that markets calculate with the deal to be reached till the end of the year. However, if the deal is not done (the market is not prepared for that), we could expect a very strong sell-off.

The Brexit talks continue this week. Both sides still hope for a deal, even though many deadlines have been already passed.

The UK and EU realize that things need to move forward as we are approaching the end of 2020.

If an agreement is done, it needs to be also implemented in both sides’ judicature till the end of December. Simon Coveney, the Irish Minister for Foreign Affairs said on his Twitter account that “It’s a big week ahead and time is running out to find common ground.“

GBPUSD shows a bullish perspective for the beginning of the week indicating hidden bullish divergence with the MACD oscillator.

However, the mood could turn around later on, as indicated on the weekly chart.

The weekly chart implies the possible tiredness of the sterling with the feasible double top formation and bearish divergence (in case the MACD does not move above previous highs). 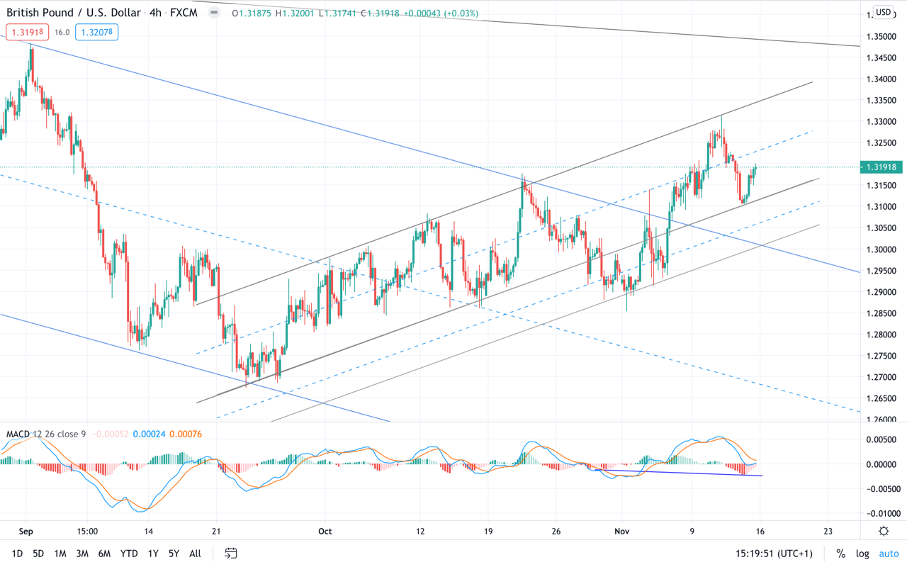 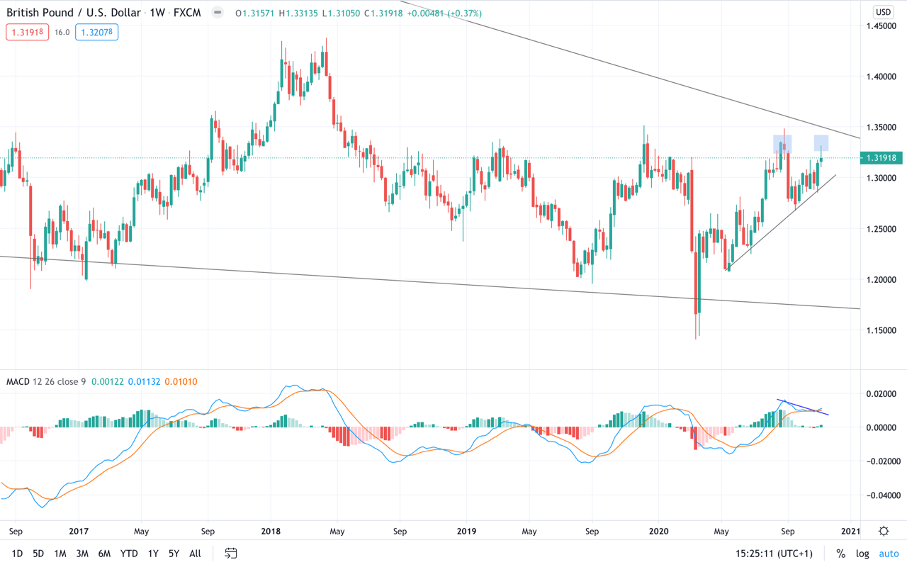 Bitcoin moved above 16,000 USD last week, the highest level since the beginning of 2018.

The cryptocurrency is benefitting from economic uncertainty brought in by the U.S. elections and corona crisis.

Bitcoin’s value has more than doubled this year, reminding the year-end rally from 2017, when the cryptocurrency broke above 20,000 USD.

Key economic events for this week

The market sentiment will have to find a way between uncertainty caused by increasing Covid-19 cases, more economic lockdowns worldwide, and promising Pfizer vaccine.

The U.S. Retail Sales might dominate the market along with a few FED speakers.

It is expected that the US Retail Sales will rise on the solid path and overcome pre-pandemic levels.

Americans shift their spending from travelling to consumption goods, helping retail sales to keep strong. Though, the key question is, how long can the momentum last without fiscal support?

Japan will release its GDP data on Monday. Several ECB and BoE board members are expected to speak during the week. Australia will release labour data on Thursday and RBA will release its minutes on Tuesday. Governor Philip Lowe speaks on Monday. Also, there is an OPEC meeting scheduled for Tuesday.

EURUSD broke above the declining trendline connecting the tops from 2008 on the weekly chart, giving us a very bullish sign about the euro. 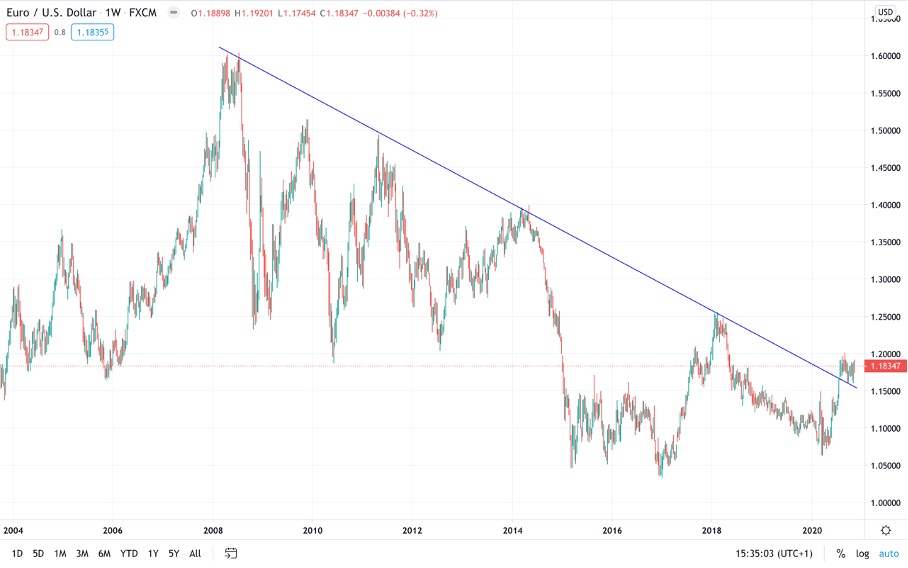 The daily chart confirms the positive outlook for the euro moving in the upward channel. 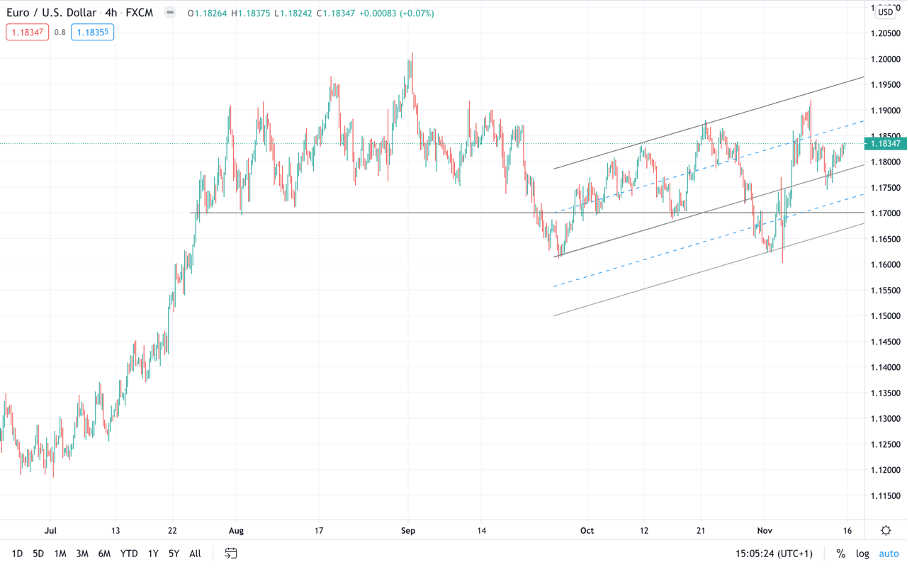 What’s on the macroeconomic calendar this week:

Renko Chart – A new perspective to inform a trader