Donald Trump took control of the market sentiment last week. It seems that he quickly recovered from Covid-19 and took his election fortune in his hands. His statements about the fiscal package were moving the prices of the assets last week. Firstly, he announced that the White House stopped negotiating stimulus until after the election on Tuesday. This news turned the U.S. stock market and risky assets into negative territory. Later, he urged for airline help on Wednesday and this revived market sentiment and appetite for risk. The idea of an airline package was rejected on Thursday as some politicians wanted to approve it only as a part of the whole big support package. Finally, Donald Trump ended the week with the news that he raised the Covid-19 stimulus offer in Congress to $1.8 trillion.

As we wrote in our last week’s analysis, nobody wants to be short in stocks in case the support Covid-19 package is approved. The markets confirmed this idea, rallying once the U.S. president indicated support for the stimulus package in the second half of last week. The Dow Jones ended the week with a gain of 3.3%, the best performance since August. The S&P 500 and Nasdaq moved up 3.6% and 4.8%, respectively performing the best week since July.

The events from the last week confirmed that the fiscal package is the key interest for markets right now. The investors know that without the package, the economy may lose steam and recent recovery can burn out. And nobody wants a double bottom (W-shaped) recession. This scenario is becoming more likely with the increase in positive Covid-19 cases in the USA and unapproved fiscal aid. In fact, it is very hard to believe that the package will be approved until the election (in 3 weeks time). We can expect that Donald Trump does not want to lose votes in the upcoming elections, so he would probably send out only positive signals about fiscal package talks. Undoubtedly, he might start doing whatever it takes to make the package approved to help his re-election efforts. Finally, the market can position itself in the way that this scenario will turn into “buy the rumour, sell the fact” news. Speaking about the impact on the US dollar, the package will increase state debt a piece of negative news for the U.S. dollar, which fell to a 3-weeks low last week. The weaker U.S. dollar led to the appreciation of other major currencies like the EUR, AUD, CAD, GBP last week.

The positive sentiment on the U.S. stock market and appetite for risky assets (the U.S. dollar is on the opposite side and plays a safe haven asset in this game) could be supported by the beginning of the U.S. earnings releases this week. The U.S. banks are expected to roll out positive Q3 earnings this week (starting on Tuesday). From the U.S. macro calendar, the Inflation data (Tuesday) and Retail Sales (Thursday) should be watched.

The second presidential debate is scheduled for Oct 15 and will be virtual. Though, Trump refuses to participate in it saying that he is not going to waste his time in the online debate. Joe Biden is leading the pools almost by 10%, diminishing the uncertainty about the election results. Lower uncertainty pulls the U.S. dollar lower. Also, Biden’s victory would probably offer the U.S. economy more fiscal stimulus, indicating wider state debt, which would be a negative sign for the U.S. dollar.

We can see the inverted head and shoulders formation on the S&P 500 index with the broken neckline, indicating more space for the index to rise. The formation remains valid until the index keeps moving in the territory above the neckline. 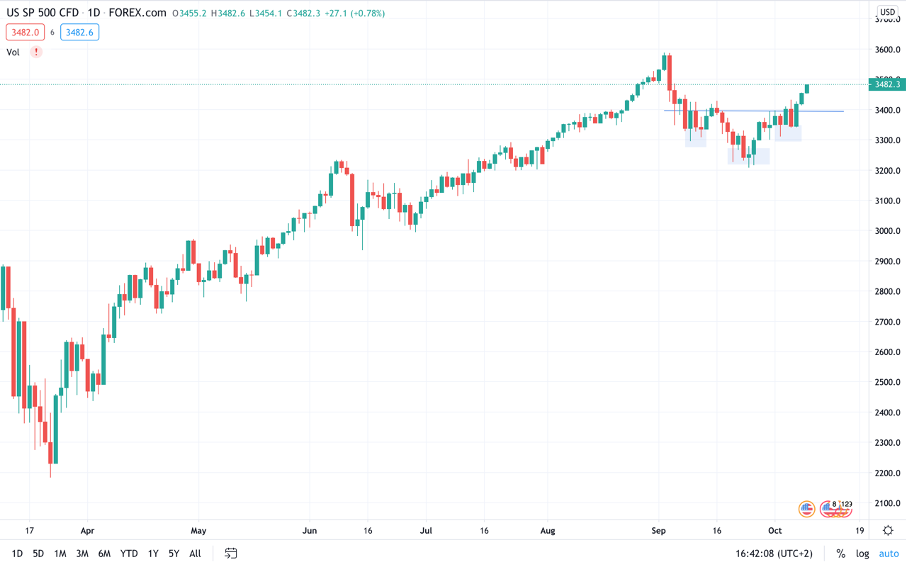 The appetite for the risk was also seen on the European stock market last week. The German DAX index moved higher in the ascending triangle. The triangle formation gives an opportunity for the index to retest the previous tops and trendline connecting the tops from February. 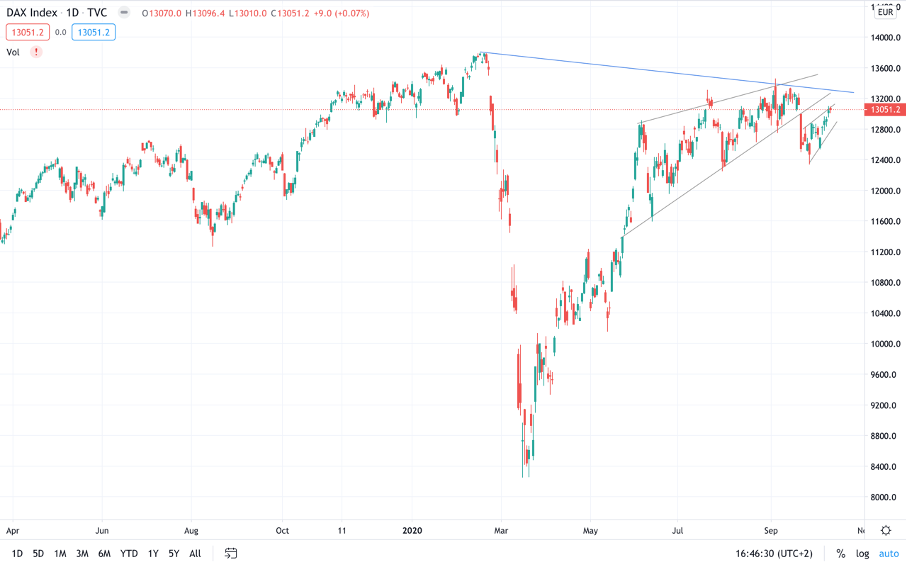 The euro benefitted from the lower U.S. dollar last week. EURUSD returned back to the channel, it moved in from July till September. The lower line of the channel represents strong support for the euro now. Staying in the channel makes the outlook positive for the euro. 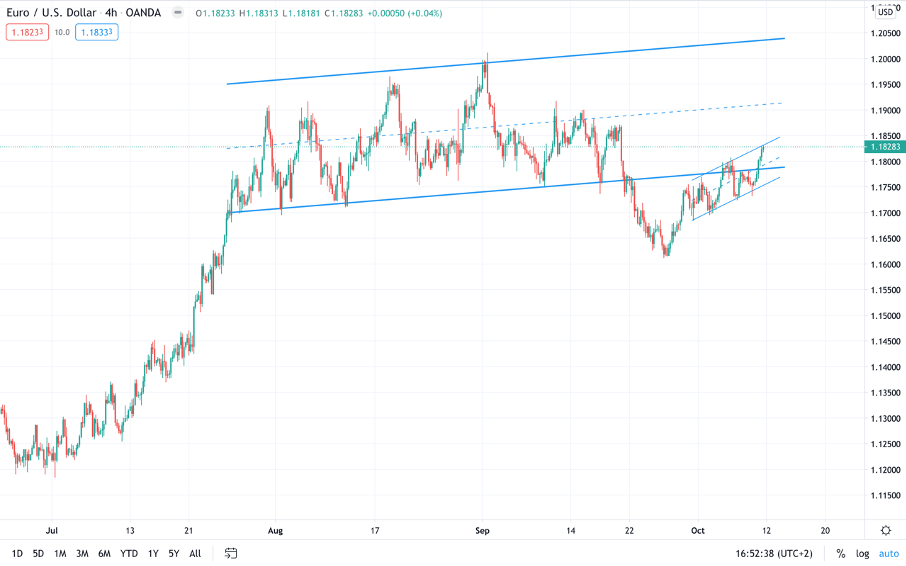 The UK economy grew by 2.1% on a monthly basis, and missing the expectations of 4.6% growth in August. The recovery is coming at a slower pace than was expected, which is not good news for the UK economy preparing for stricter lockdowns with the rising numbers of Covid-19 cases. The UK economy is 9.2% below the level it was in February when Covid-19 appeared. The worsening economic situation with Brexit ahead may force the Bank of England to increase its QE program at its November meeting. So far, the bank decreased interest rate from 0.75% to 0.1% and rolled out the QE program worth 745 billions of Pounds. Despite the weak economic outlook, the sterling benefitted from the weaker U.S. dollar and Brexit talk optimism last week. Watch the EU leaders summit this week on Oct 15 and 16 for more information concerning the Brexit progress talks.

Another inverted head and shoulders formation can be seen on the daily GBPUSD chart. The sterling moved up above the strong resistance of 1.3000 crossing the neckline, closing above it and opening the space for more appreciation. Even though the Brexit talks are not very clear now, the sterling would probably benefit from the lower U.S. dollar. 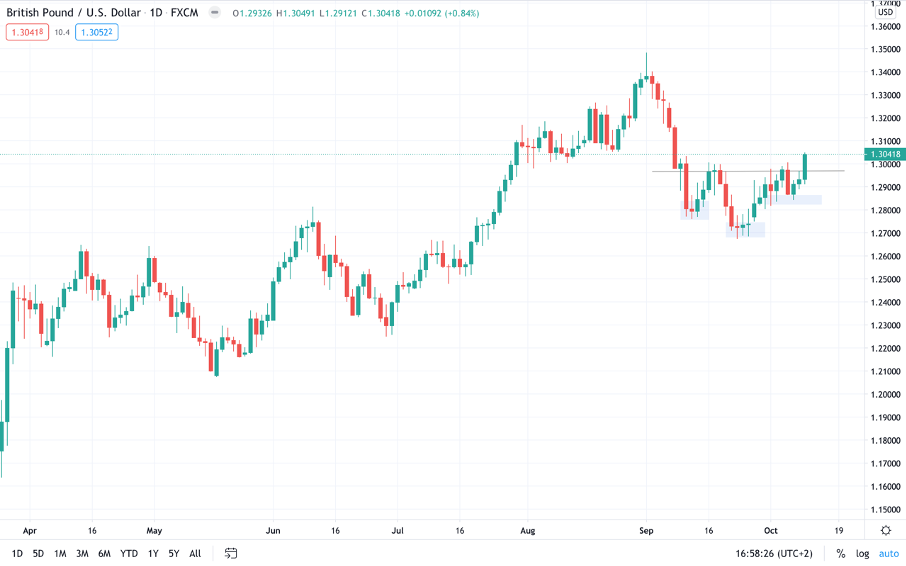 The outlook is not so optimistic for the sterling against the euro. It has moved sideways, consolidating in a triangle formation since the beginning of September. The pair is approaching the tip of the triangle and the gap in the formation is closing in. We prefer to wait for a triangle breakout to establish a new trend.

USDJPY is also moving sideways in the consolidation triangle. Approaching its end, the triangle is narrowing and the possibility of breaking either of its sides becomes more real. It’s worth watching it and waiting for the signal after the price breaks out of this triangle.

Gold also benefited from the cheaper U.S. dollar and moved higher. It broke up the triangle formation, which opens the space for further appreciation. The round number and resistance at $2000 could stand in a further rise. However, we could see any backtest of the triangle as it was a very strong formation (gold stayed there for 2,5 months).

What’s on the macroeconomic calendar this week:

How to think in probabilities